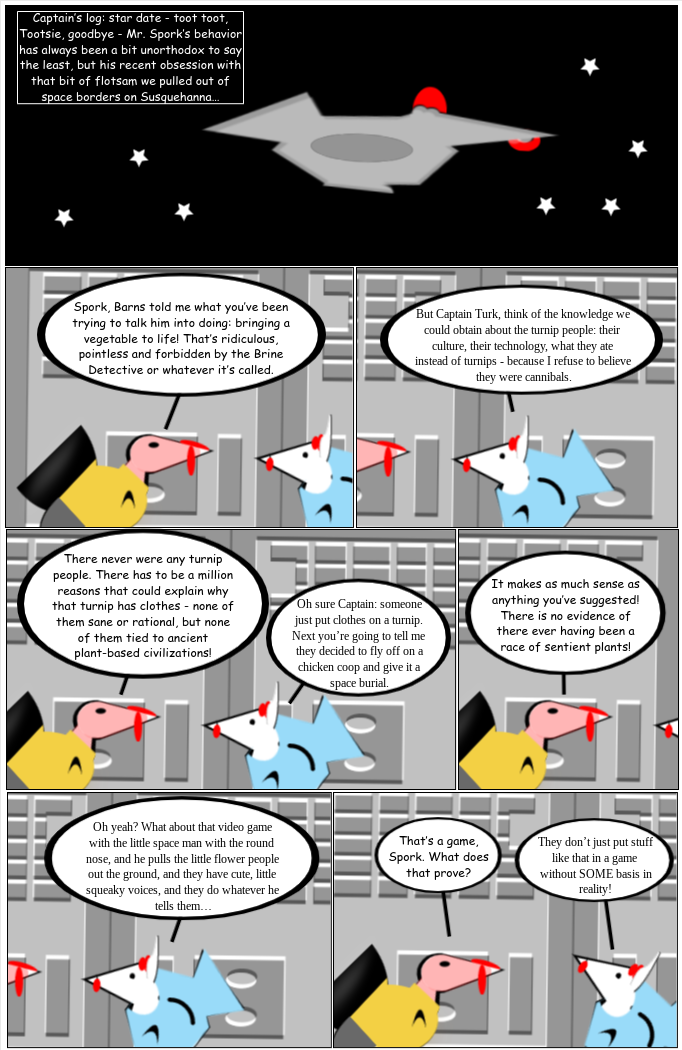 Mark Burkhart
And no don't want to make a turnip

Mark Burkhart
If I didn't kill that turnip, I will when you revive it...

NeoChomik
i'd rather not know what they based it on

El_Ceviche
Good to know. Aliens and giant apes out there somewhere then. Maybe in the same chicken coop!

Pen_alias
Transcript 2: Oh sure Captain: someone just put clothes on a turnip. Next you’re going to tell me they decided to fly off on a chicken coop and give it a space burial. It makes as much sense as anything you’ve suggested! There is no evidence of there ever having been a race of sentient plants! Oh yeah? What about that video game with the little space man with the round nose, and he pulls the little flower people out the ground, and they have cute, little squeaky voices, and they do whatever he tells them… That’s a game, Spork. What does that prove? They don’t just put stuff like that in a game without SOME basis in reality!

Pen_alias
Transcript 1: Captain’s log: star date - toot toot, Tootsie, goodbye - Mr. Spork’s behavior has always been a bit unorthodox to say the least, but his recent obsession with that bit of flotsam we pulled out of space borders on Susquehanna… Spork, Barns told me what you’ve been trying to talk him into doing: bringing a vegetable to life! That’s ridiculous, pointless and forbidden by the Brine Detective or whatever it’s called. But Captain Turk, think of the knowledge we could obtain about the turnip people: their culture, their technology, what they ate instead of turnips - because I refuse to believe they were cannibals. There never were any turnip people. There has to be a million reasons that could explain why that turnip has clothes - none of them sane or rational, but none of them tied to ancient plant-based civilizations!