Yet Another Character Showcase 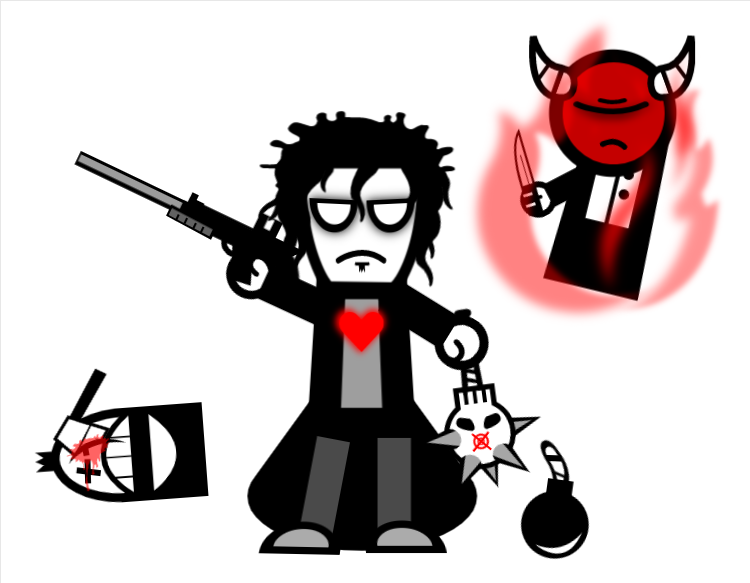 Design for a character I plan for issue 4. For now let's just say his name is...Not Important. Now, Not Important is, to put it bluntly, a mass shooter. Might seem like I'm using a third "I'm evil cause I'm evil" villain, but I think it'll be interesting because I don't think someone like this is fundamentally different from a character like Julian. He hates the world, how it makes him suffer, and one day he finally snaps and puts his feelings into violent action. He's just targeting the wrong people. He's also completely aimless with no real strategy, just running off pure emotion. Sound familiar? His heart is...well not exactly so. internally I've had lore for a while that hearts are more than what they appear, but I'm finally going to show. The line between heart, spirit, god, spell, or any other kind of magic is extremely blurry. His 'heart' is a demon that grows stronger as his hatred does, and grants him the tools to enact his retribution. "Conventional Weapons"

Naga sake
Honestly, man, if you ever check out my other stuff, THIS is honestly quicker than most things I do. You'd be suprised how much you can do with such a simple system. I've been using this program since it was on an entirely different site, called Strip Generator, back in 2010.

Naga sake
Yeah, very clearly he's inspired by the hatred guy. I've been really into postal recently and hatred is the true successor to postal 1. Also I literally named him not important.

Pen_alias
He should hire a caddy.

El_Ceviche
Lol I noticed Julian's height when I used him in my strip.

Naga sake
A little bit deep iceberg lore here but Not Important's design is 1. obviously the eyes are inspired by Julian, but the head is inspired by Balistic06 from SG, and Conventional Weapons' design is inspired by an SG user who's name I forgot, but who's avatar I remember pretty well. Also, I think going forward this sort of in-between character design; something more than the stock characters but less than the full marionette design as far as detail and articulation are concerned, is gonna become the default, but characters will vary as always. might help in regulating the bell curve of character heights, as Julian has always been WAAAY taller than everyone else.