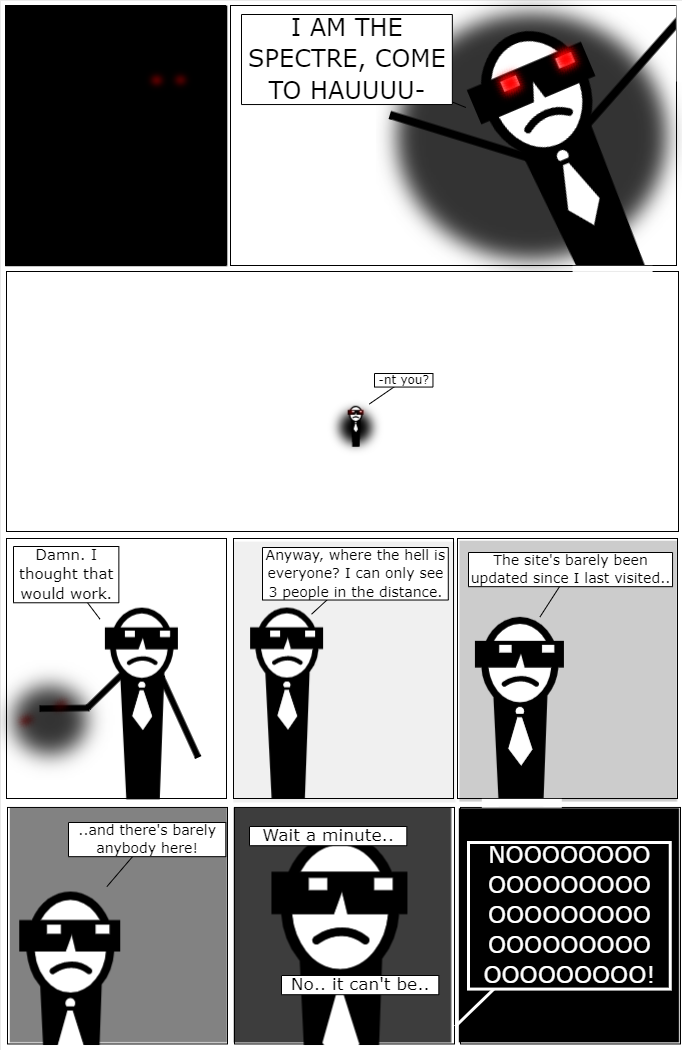 ..and has an existential crisis. But in all seriousness, what the hell happened? I remember this being a thriving community ready to explore the new frontier, and now it's reminiscent of StripGenerator's final days. (that was the punchline of the comic by the way). The site hasn't been updated in god knows how long, hardly anybody's active anymore, and every third thing is broken! I really want to know what happened in detail (bonus points if you put it in a comic). If I was able to have full control, I'd probably pump out many comics at once as a series as the former character attempts to figure out what happened. Sadly, I don't have total freedom. Of course back in January, we didn't, but at this point, I expected a little.. more. Why has nothing progressed? Why is there only two active users? Why are we so close to the 100th user? I need ANSWERS!!! Also, if anyone knows where the Discord to ComicCreator is (or if it even exists at all), please send me the invite. See you later! :)

El_Ceviche
Love you to brotha Neo ;)

NeoChomik
Unlike SG, that was the project made by a group of people, Comic Crafter is basically a single-man project. And that person has a life, a work, and other actual things to take care of. But still they try their best to update it when they can. Nevertheless, it's amazing that we even got this far after the collapse of StripGenerator. As for the fall of community, It feels like Deja Vu from last days of SG Because the same people that were here when SG ended, are the same people present here.

El_Ceviche
I'm back from Summer break, however I have been struggling to get out a strip as my strips seem to pick up bugs that make it impossible to finish a full page so far. I'll get it out though.

Pen_alias
At least it's peaceful.

LegitSi
Things that got cut from the final take: -the character asking why he looks different (because I tried to change my avatar and couldn't) -asking the only other person besides MadameCercle and Pen_alias what happened (ran out of space) -A reference to how Pen_alias is funny but I can't get their jokes (for some reason i felt the need to include that) -All the things that broke and should've been fixed by now (once again, ran out of space)